Forgiveness In The Munajat Sha'baniyyah

Title: Forgiveness In The Munajat Shab'aniyyah 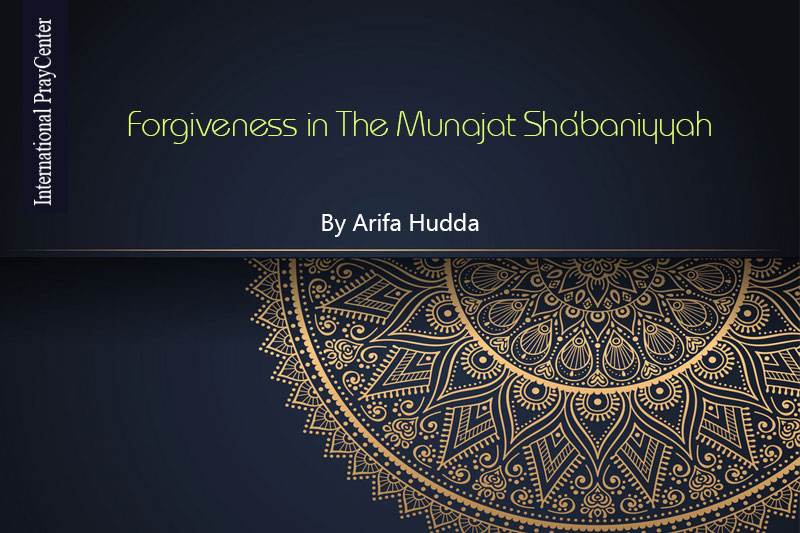 Communicating with the divine can take various forms; among these, the most powerful heart-to-heart conversation is found in the spiritually-potent whispered prayer known as Munaajaat Sha’baaniyyah. What follows in this piece is a glimpse of the concept of forgiveness in the whispered prayer, and a description of its various forms, that is, the various types of seeking forgiveness and accepting an apology, as well the reasons for why people accept apologies from one another. Lastly, how to address Allah when seeking repentance will be addressed. Our asking for forgiveness from Him should be such that we plead with Him until He accepts our apology. If a person wants Allah’s forgiveness and mercy we are to manifest this trait of Allah – the OftForgiver – within ourselves; and in order for Allah to forgive us, then we need to forgive others as well.

The beautiful “Whispered Prayer” known as Munaajaat Sha’baniyyah - also referred to as the Munaajaat of Imam Ali – was recited by him and the Imams, and ranks amongst the most sublime of their prayers.
Islam consists of various methods of communication and communion with Allah – namely, the recitation of the Noble Qur’an, the supplication (du’a), and the whispered prayer (munaajaat).
Unlike the whispered prayer, du’a is a general and encompassing term literally meaning ‘to call upon [someone]’. It can be recited in a number of ways: from far away or close by, loudly or quietly, from a person known to the listener or a stranger – these calls are referred to as du’a. In the Islamic tradition, such an appeal forms an inner connection between the finite and the Infinite – the servant and Allah, the Most High.
However, the munaajaat – or whispered prayer – and its source word in Arabic, najwa, is a whisper or secret talk – a specific communication with someone such that no one else can hear this communication – in essence, is a form of spiritual intimacy between two individuals.
Therefore, in a Munaajaat, sometimes Allah communicates to a person (through inspiration) or people communicate to Allah, and this is what is known as a dialogue or reciprocal form of communication.
In this regard, Imam Ja’far as-Sadiq beautifully states:

And surely when the servant, in the darkness of night, secludes himself with his Master (Allah) and engages in the whispered prayer to Him, Allah confirms the Divine light (noor) in his [the servant’s] heart. Then, when the person calls out, ‘O Lord! O Lord!’ The Sublime One (al-Jaleel), may He be Glorified and Exalted, calls out to His servant, ‘Here I am My servant. Ask Me and I will grant you; have complete reliance upon Me and I will be sufficient for you. Then He, may He be Glorified and Exalted, proclaims to His angels, ‘O My angels! Look towards My servant; indeed, he has secluded himself in the darkness of the night with Me, while the spiritually idle people are engaged in futile acts and the heedless ones are asleep. Bear witness that indeed I have forgiven him.1

Therefore, the Munaajaat is such that one speaks knowing that Allah has heard him, responded to him, and has even asked His angels to help this servant.
There are many well-known whispered prayers conveyed to us through the endless teachings of the Ahlul Bayt, peace be upon them; some examples of these are the fifteen whispered prayers (Munaajaat) of Imam Zaynul Abideen, which can be found at the end of as-Sahifah as- Sajjadiyah;2 the Munaajaat of Imam Ali, in which he used to recite and is famously known as the “Munaajaat of Imam Ali in Masjid al-Kufa”; and the Munaajaat Sha’baniyyah which was a personal favourite of the late Ayatullah Khomeini, the late founder of the Islamic Republic of Iran, who recommended its recitation when he wrote his final will and testament. He said that it is not known to him if there is any other intimate whispered prayer or supplication that has been recited by all of the 12 Imams other than Munaajaat Sha’baniyyah.
Thus, Munaajaat is an expression of our love to Allah; it is the language of love - not the language of logic. It contains various etiquettes of invocation to Allah – how to ask Him for forgiveness and reach out for His mercy.

In the following, the part of Munaajaat Sha’baniyyah that deals with a servant pleading for forgiveness from Allah for his wrongdoings and evil deeds will be used as a springboard to describe the different types of seeking pardon.
For example, let’s say a person says something unpleasant to his friend during an argument with him, regrets it shortly afterwards, and resolves to ask him for forgiveness. One must not convince himself that he did not do anything wrong; rather, one must acknowledge that something wrong was done, and then seek forgiveness by humbling himself until his friend accept his words of repentance. In this situation, one will be forgiven by their friend, God-willing.
In another kind of seeking forgiveness, a person understands that in order to reach perfection they are to ask for forgiveness for their evil actions with humility and the proper etiquette. However, it does not matter for this person if the other side accepts one’s repentance or not; they merely want to be content that they have “fulfilled their obligation”. And this is all that is important for them; nothing else matters. They feel that they are not really in need of having their forgiveness accepted; they simply say sorry out of a sense of duty.
A third instance is when a person has killed another individual and a sentence has been made against him that unless the family of the deceased one forgives the perpetrator, he must be put to death. For him it is very crucial that his forgiveness is accepted by the other party, and therefore he will plead and plead with the family and beg them to pardon him because he realizes that he is in a life and death situation.
When one is seeking forgiveness from Allah for the many sins committed, it should resemble the third type of forgiveness in pleading to Him; it is very crucial that our apology be accepted by Him and we make ourselves worthy of attaining His forgiveness.
In the following part of Munaajaat Sha’baniyyah, we recite:

My God! My offering excuses to you is the offering of excuses of one who cannot do without the acceptance of this excuse – so accept my excuse – O the Most Generous of those to whom the evil doers offer excuses.3

Therefore as we mentioned, our asking for forgiveness from Allah should be such that we plead with Him until He accepts our apology because there is no other choice that we have in the matter. If He does not forgive us, we are doomed in this world and the next.
A similar phrase in Du’a Kumayl reads:

O Allah! So then please accept my excuse!4

Acceptance of an apology

There are several dimensions in the acceptance of an apology:
1. The other party may simply say “I accept your apology”;
2. Some may console you by saying, “I know that you did not do this [wrong act] intentionally;”
3. Others may remind the other person how to ask for forgiveness, a more admirable method;
4. Another one may respond by apologizing and consoling them for the wrong action that was committed by the wrongdoer.
Therefore, an ordinary person will plainly accept the apology, a spiritually higher person would indirectly teach them how to ask forgiveness, and the highest spiritual level includes the one who forgives beforehand and even consoles the wrongdoer for his or her evil action.
Reasons for why people accept apologies from one another
The reasons for accepting apologies from others include the following:
1. One may accept the apology of another person with the intention or hope that if one day they are need of something or require help, they can remind that person, and almost in a way, make them feel obliged to help them out only because they had accepted their apology previously;
2. Some people may forgive another person because they too in turn want to be forgiven by them;
3. Often times, friends may forgive each other because they want their friendship to take on a new or greater form and in turn they want to personally benefit from that;
4. One wants to be forgiven by Allah, and we know that if one wants the forgiveness and mercy of Allah to be showered upon us, then we need to manifest this trait of Allah – the Oft-Forgiver within ourselves; and in order for Allah to forgive us, we need to forgive others as well.
In the above scenarios, a person is looking at the rewards involved – be it from other people or from Allah. There is some aim in mind for which a person is willing to forgive the other party for their shortcomings. However, when Allah accepts our apologies – provided that we plead to Him and beg Him in the right way – then it is not for any reward or benefit that He receives or is looking for; rather, He forgives us out of His greatness and exaltedness. In fact, not only does He accept our apology and forgive our lapses, but He even teaches and guides us on how to do so.
All praise belongs to him – the Most Merciful, the Most Forgiving – and we pray that we can forgive others just as we would like Allah to forgive us and overlook all of our many slips and faults.